The goal of NMX 53P was an economic analysis of Valencia type peanut production and its efficiency in Bulgaria, peanut germplasm enhancement with new accessions and traits using molecular marker approach, and investigation of U.S. varieties in Bulgaria and Bulgarian varieties in the U.S. for yield, maturity, and fungal disease resistance.

Valencia type peanut is the major type for production in both New Mexico and Bulgaria, which has contributed greatly to successes in this project. A good range of Valencia lines were assembled for evaluation in Bulgaria and Bulgarian lines were brought to New Mexico for evaluation. Some new Valencia material appears to be performing well in Bulgaria, but the growth cycle may be too long. In Bulgaria, U.S. Valencia cultivars were compared to Bulgarian cultivars including the standard check variety-Kalina; characteristics assessed included maturity, yield and fungal disease resistance. U.S. accessions were later maturing than Kalina and were also lower yielding (Kalina 4824 kg/ha and the best U.S. cultivar Sunland 3591 kg/ha). Fusarium was the most important disease followed by Alternaria and Phyllosticta. Expertise in processing and food technology of this type peanut in the U.S. will be of benefit to Bulgaria (through cooperation with UGA 11 project). In the U.S., a good range of Valencia lines has been assembled for evaluation in New Mexico. The Sadova lines are performing well in the New Mexico, however, they are 2-3 seeded (usually 4 in U.S. Valencia’s, commonly known as “ball-park” type marketed as roasted in-shell), shorter in stature, and earlier maturing than U.S. types. However S3663 is performing well in the U.S., and has been tested and now grown by a farmer in Nebraska. Crosses have between NM Val A and C, and Kalina and Rossitzka have been made and tested in Bulgaria and the U.S. Molecular biology techniques and use of cluster analysis has given insight of germplasm grouping, which should help in identifying more widely differing genotypes for hybridization. The U.S. principal investigator, Dr. Naveen Puppala, has benefited by the contact and interaction with Dr. Stanko Deliostadinov the Bulgarian collaborator, because his experience and competence. Dr. Deliostadinov had limited international contact for many years because of travel restrictions, and has greatly benefited from his work with Dr. Puppala and the Peanut CRSP. 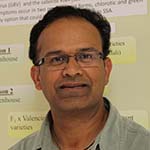