The development of genetic markers for improvement in breeding for resistance to diseases, insects, and biotic stresses has been important to Texas and the U.S. The release of the nematode resistant variety “Nematam” will be important to Southwest U.S. peanut production. The success in the development of high oleic/low linoleic acid germplasm/ varieties is important to the U.S. industry, and a new variety with this trait was released in Texas. New cultivars with disease resistance, seed dormancy, and high oleic/low linoleic oil that delays the development of rancidity and increases shelf life are near release in Senegal and Burkina Faso. Continued exploitation of genes from wild species is important for traits not normally found in the cultivated species. TAM 14 was closed with the retirement of Dr. Charles Simpson, Texas A&M University/College Station, but some of his objectives will continue in this project, i.e. use of wild species. 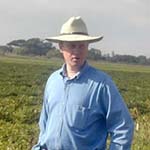