Researchers in Senegal and the U.S. are working to better understand and use the genetic diversity of cultivated peanut and its wild relatives, empower farmers through improved varieties and agronomic systems, and better understand the constraints that keep young people and women from engaging in peanut farming or new technologies.

Enhancing the genetic potential of peanut production in West Africa

Peanut breeders across Africa each hold small parts of the plant’s genetic diversity. This project brings together several countries to evaluate the diversity available, develop a set of about 200-300 accessions from across different regions to represent available diversity, and use this set to find the genetic basis for target traits, creating a broader genetic base for peanut breeding programs.

Genetic variation in peanut is limited due to its recent, polyploid origin, which limits crop improvement through breeding, but wild relatives of peanut hold alleles that can offer favorable traits when the wild alleles are incorporated through backcrossing. This is a strategy well-proven in multiple crops. Advanced backcross populations have been completed or partially developed in previous projects. From one of these populations, six new varieties were released in Senegal – with improved yield stability, haulm mass, higher yield and larger seeds. Other lines are showing resistant to late and early leaf spot (LLS and ELS). The proposed work will build on these successes, evaluating a previously developed set of lines and laying the foundation for the production of new ones.

Breeding and enhancement of resistance to leaf spot, tolerance to water deficit, and improved oil composition in groundnut

Lack of water and leaf spots are two of the major factors that limit peanut yield in Africa. This project uses wild species, genetic populations generated in the USA and West Africa, and selected ICRISAT breeding lines to introduce genes for drought tolerance and resistance to leaf spots, as well as enhance oil composition. DNA markers for those traits will be shared with national programs and training provided for use in selecting for these traits and for high oleic acid content.

Using new, but inexpensive sensors that detect temperature, color saturation and other data, scientists can quickly assess whether plants inherited desirable traits, such as drought tolerance or disease resistance. This large-scale, rapid and accurate phenotyping helps plant breeders more effectively develop cultivars that can survive in harsh conditions and with minimal inputs. The project is providing breeding programs In Ghana, Senegal and Uganda with several such sensors along with training in their use. The project will use the sensors to phenotype a number of lines in the field trials to determine the most useful technology for each program.

Shrub intercrops in the Sahel: A novel resource for bio-irrigation and beneficial microorganisms to resist drought and optimize yields

This project aims to investigate the Optimized Shrub System (OSS), which increases shrub density of two local shrubs that have been shown to increase the availability of water in the root zone, and ultimately, increase productivity of millet. Initial results indicate similar effects on peanut production, but further verification and refinement are necessary. Improved food and nutrition security, agroecosystem sustainability and resilience, and women’s empowerment are the expected outcomes of this project.

Retaining next generation farmers in the Senegalese groundnut basin

Despite the strong historic emphasis on peanut production in central and western Senegal, climate variability and uncertainty in policies have made for a risky production environment in recent years, and reduced incentives for young adults to enter into farming. This threatens the long-run viability of peanut production. The project explores climatic and land-tenure constraints to youth participation in the Senegalese groundnut sector and evaluates the feasibility of technology and policy options to address constraints.

Gender, fertility, and intrahousehold dynamics and resilience in the Senegalese peanut product chain

Women in Senegalese households balance work that involves gendered responsibilities and is complicated by a household structure including multiple wives and other relatives. This project studies how the peanut value chain is impacted by the number of children a woman has, the power dynamics in her household and climate shocks that happen in the area. Researchers are studying whether women who have more children are busier, so they participate less in peanut production and are less able to follow best farming practices.  Women who are expected to manage the household, as well as participate in peanut agriculture, have little leisure time, and researchers want to know how that impacts peanut production. 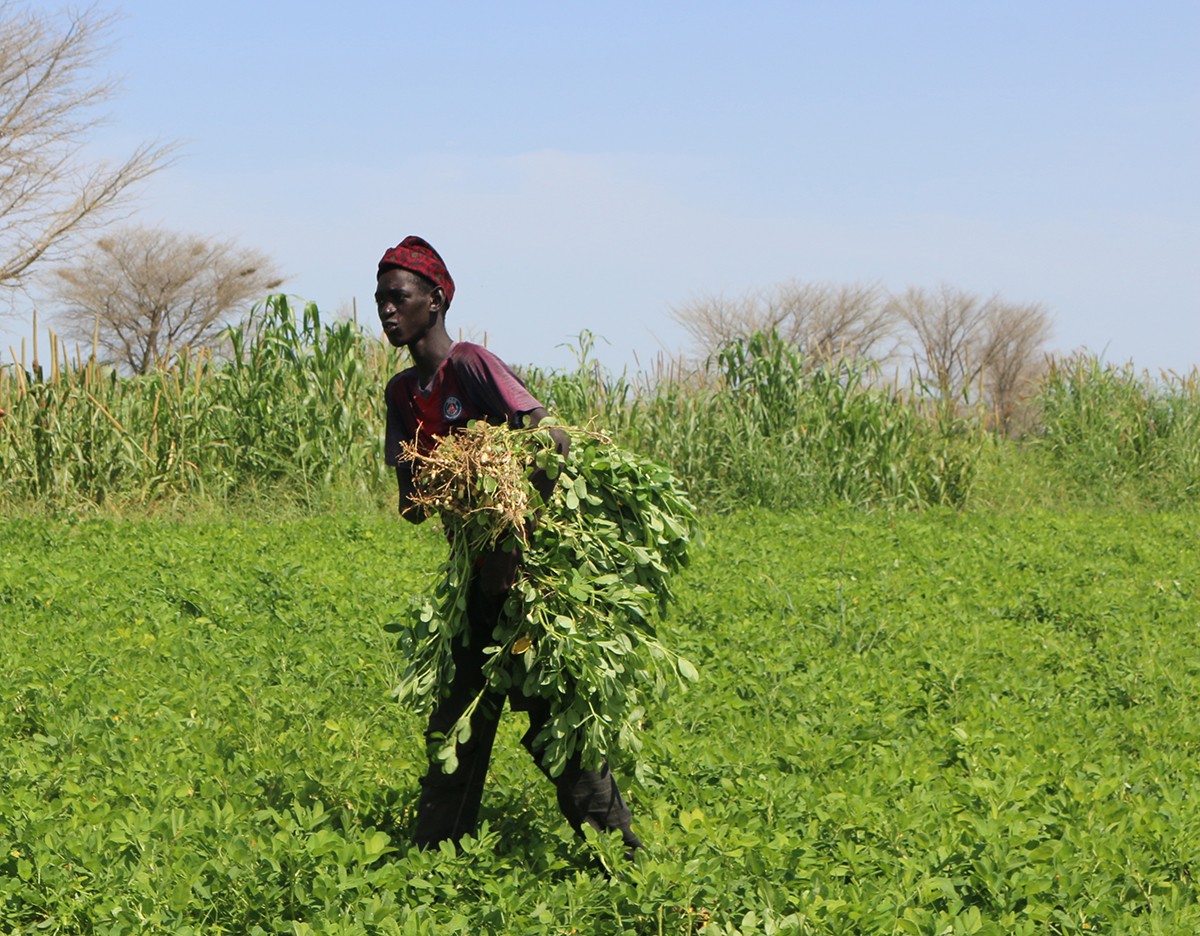 Senegal is located in western Africa along the Atlantic Ocean. French is the official language, but regional languages are commonly spoken as well, including Wolof and Soninke. Senegal is about the size of the US state of Nebraska.

Challenging economic situations and diet shifts, particularly towards high-fat foods, have maintained a high level of undernourished people within the country. About 25% of the population is undernourished.

Peanuts are one of Senegal’s largest food export products, but the peanut sector has experienced extreme variability. For example, in 2008, the harvest dropped to half. Low rainfall and poor seed quality were to blame. Production has shifted south to areas with more rain availability.

Recently, production has increased and in 2010, the government of Senegal began to allow exports of all types of peanuts, reversing a ban that had been in place during the French Colonial Period. However, primary markets remain domestically based. Smallholders are the primary producers of peanuts.

Improving the yield Senegalese farmers get from their land would help the smallholder farmers’ bottom line and provide nutritious food for malnourished children. 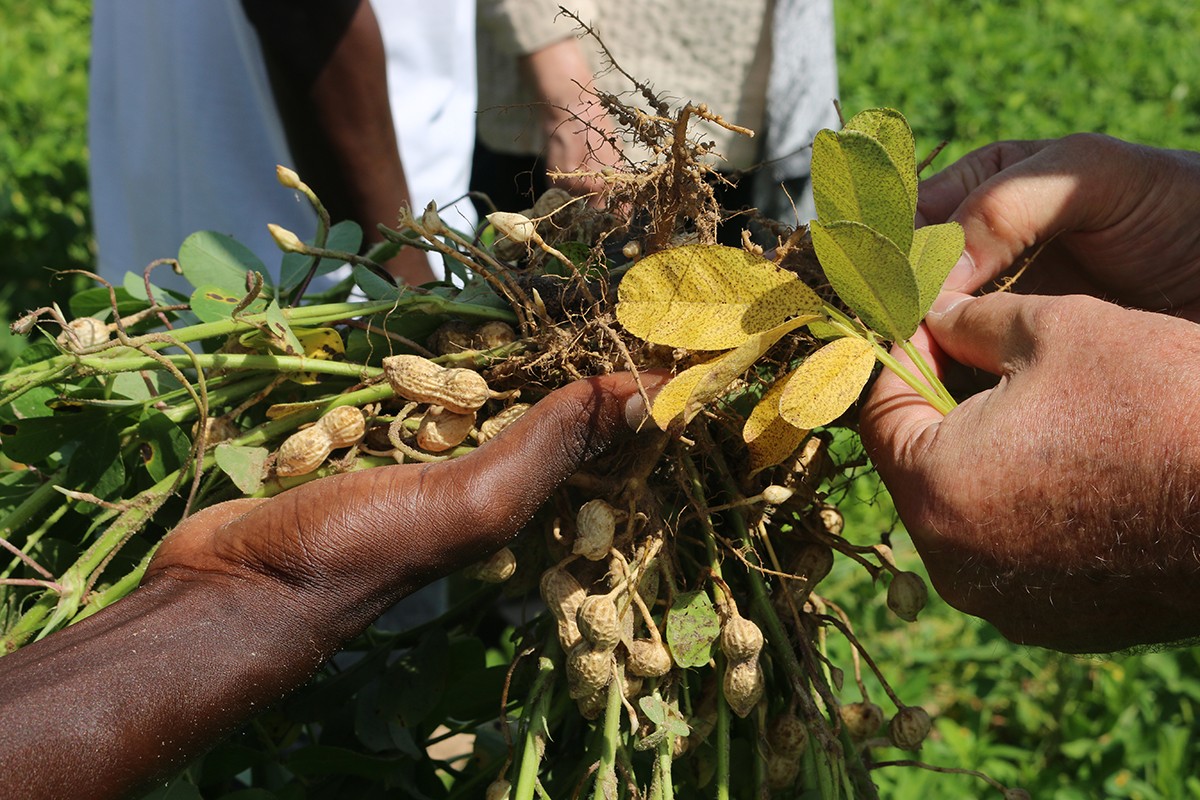