Researchers in Uganda and the U.S. are breeding improved peanut varieties to enhance productivity, quality, and marketability of peanuts in the country. For example, varieties are being developed for resistance against disease and pests, such as groundnut rosette disease and leaf miners. At the same time, projects are looking at the nutritional and social impacts of peanuts, including how consuming peanuts impacts the gut.

Improving genetic potential
The project will use molecular markers to dissect specific traits and identify favorable alleles/genomic regions within diverse varieties across Eastern and Southern Africa for use in breeding programs.

Novel peanut diversity
Wild relatives of peanut will be tapped to provide new alleles that will give cultivated species resistance to groundnut rosette disease, leaf spots and other diseases. Synthetic, induced allotetraploid lines containing some of these wild species are available at UGA and will be tested and used in crosses in Uganda.

High-throughput phenotyping
The project will use relatively inexpensive, high-throughput technologies – such as heat sensors, photometers/cameras and color analysis software – to gauge the health of plants in the field in order to more quickly evaluate large numbers of plants in breeding trials, with the goal to more accurately phenotype germplasm and speed up variety improvement. 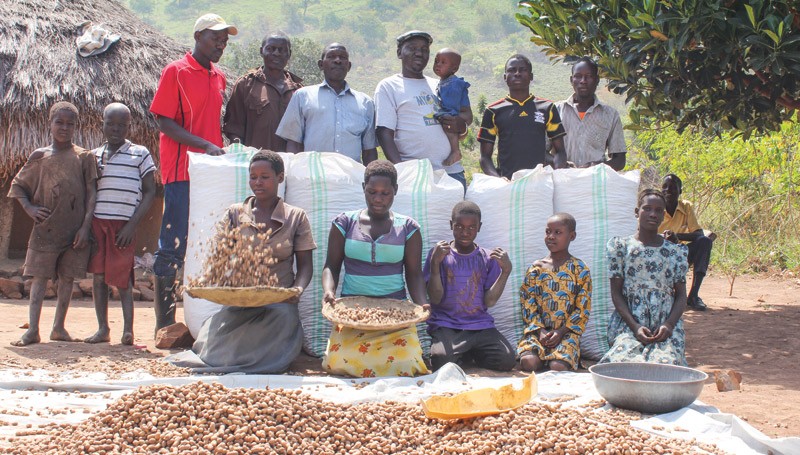 Uganda is a landlocked country in East Africa. The official languages are Swahili and English but many local languages are spoken including Luganda, Southern Luo, and Runyankore. Uganda is about the size of the US state of Michigan.

Uganda has a steady climate with temperatures ranging from 21-25° C (70- 77° F), with cooler temperatures in the mountains. This tropical country has a wet and dry season with average yearly rainfall at 100-200 cm (39-79 in). Uganda is unique with its bimodal rainfall, especially in the peanut areas.

While pulses, nuts, and leafy greens are eaten as well, micronutrient intake is lacking overall, as 15% of the population is undernourished. Child stunting affects around 38% of the population, with particularly high rates in the southwestern region.

Peanuts are primarily grown in the eastern and northern regions of Uganda. Groundnut production collapsed during the 1979 war but has been recovering to pre-war production levels through the introduction of improved seed varieties and improved crop management practices.

Challenges remain for Ugandan farmers, who are primarily small-scale. These include radical weather variations, pests and diseases, and limited mechanization.

Improving the yield Ugandan farmers get from their land would help the smallholder farmers’ bottom line and provide nutritious food for malnourished children.