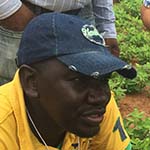 The use of molecular markers to unlock the potential for more diversity in a contrasting panel of accessions for crop improvement is a proven and successful approach. Building on the drastic reduction of genotyping costs, and an increased analytical power over the last decade, GWAS is now a powerful approach for the genetic dissection of target traits and the identification of favorable alleles/genomic regions when these are present above a certain frequency in segregating populations. In peanut, genetic variations have mainly been identified and exploited, until now, by breeders using bi-parental populations because of the lack of polymorphism in the cultivated species, and of suitable and cost-effective genotyping technologies. Recent advances in peanut genomics –  among which the sequencing of cultivated peanut and the development of a high-density genotyping Axiom_Arachis array with thousands of polymorphic SNP for cultivated peanut – open the way for high-throughput genotyping in peanut, allowing effective genetic dissection of target traits, and the identification of major genes and/or QTLs for marker-assisted breeding.

Using 200-300 accessions identified in collaboration with another project, will be tested across a range of environments and conditions in least four countries in Eastern and Southern Africa, and four in West Africa through Daniel Fonceka’s project to generate relevant information and data around diversity and the genetic basis for target traits, leading to a broadening of the genetic base for peanut breeding programs, and the development of new genes/markers for molecular breeding. The overall objective of the project is to characterize and document a unique pool of material that can be used as a new source of germplasm and alleles to improve peanut breeding in Eastern and Southern Africa. This coordinated effort across strong, existing networks will enable us to:

1)         assess diversity and identify germplasm from the core panel to be introduced to national breeding programs to fill possible diversity gaps;

3)         based on performance, identify potential new donor lines for local breeding programs; and

4)         increase capacities for a vibrant network of peanut breeders in Eastern and Southern Africa to apply modern genetic approaches in breeding, and to collectively share and analyze data.