News and Events
CAES / Feed the Future Innovation Lab for Peanut / News and Events / News / Both student and mentor, Fulmer works with Haitian students while earning his own degree

Both student and mentor, Fulmer works with Haitian students while earning his own degree

But that’s where life led him. 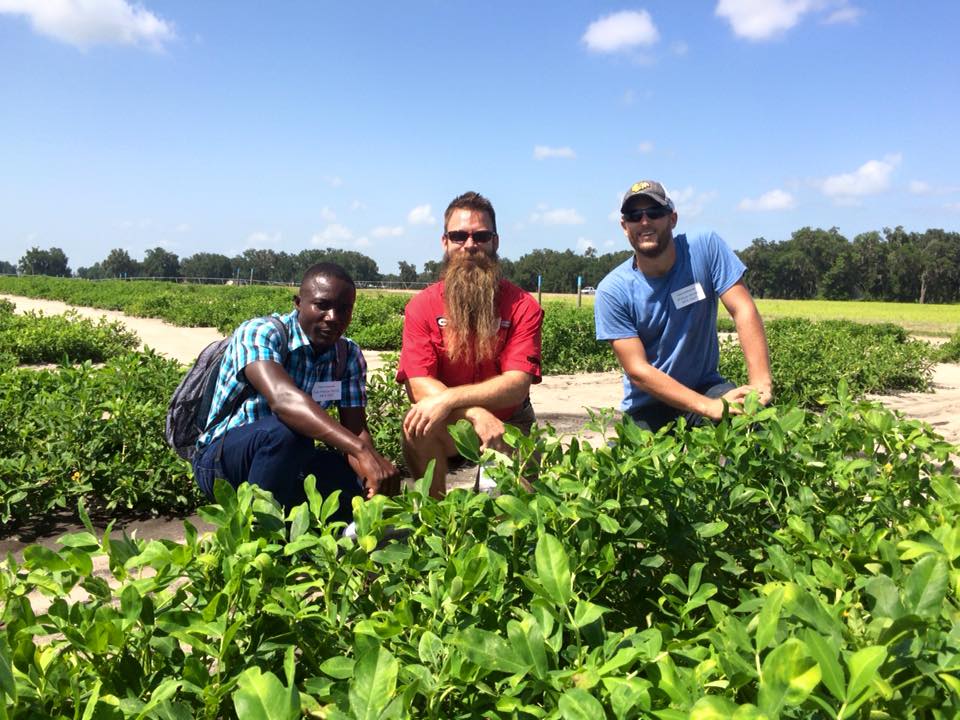 Fulmer, a PhD student at the University of Georgia, works with a Peanut & Mycotoxin Innovation Lab project in Haiti, where researchers are working to find the varieties and growing conditions that lead to the best yield and discourage disease in peanuts.

“Peanut is a fascinating crop. There’s a mystique about it being linked to the New World. The first written description of peanut was recorded on the island of Hispaniola by Bartonlomé Las Casas – probably in what is now Haiti – in the 1500s. That link is fascinating to me. Haiti itself is fascinating,” Fulmer said.

The Peanut & Mycotoxin Innovation Lab, which is housed in the Office of Global Programs in UGA’s College of Agricultural and Enivornmental Sciences, supports the education of dozens of graduate students from the U.S. and partner countries. Most of them are working on thesis-related research that contributes to a PMIL project. At the same time, professors from the U.S. and partner countries mentor the students and advise them on their research. 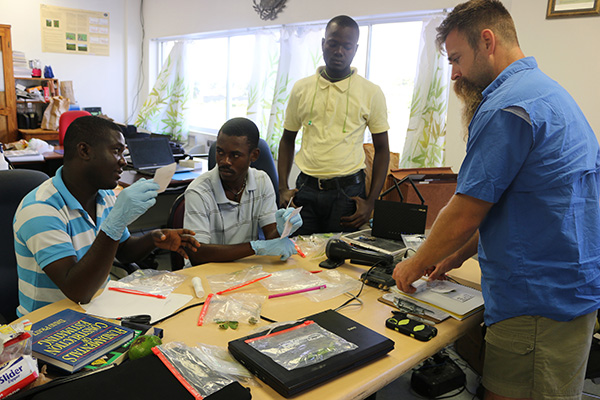 Fulmer falls somewhere between. As a PhD student in plant pathology, he’s conducts his own research in Haiti and the U.S., but through PMIL, he supervises Haitian students in their work, too.

“The most rewarding thing about the work that I’ve been a part of in Haiti is the personal fulfillment of being able to work with students,” he said.

Over the past few years, PMIL has partnered with Med & Food for Kids, an NGO that makes peanut-based food supplements and supports farmers as a way to get locally sourced peanuts. Through an internship program, PMIL and MFK give agronomy students from three universities around Cap-Haitien an opportunity to do practical research in the field. Over the past two years, 16 undergraduates have worked with PMIL and MFK; half of the students are men and half are women.

In Haiti, an undergraduate degree in agronomy calls for five years of study and a thesis project, requirements that are similar to a master’s degree in other places. 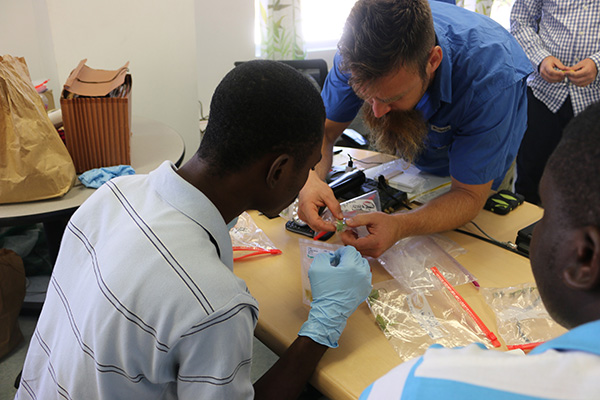 “The students compete to earn a spot in the internship program; it’s a good opportunity for them,” Fulmer said. “Each one designs and implements a trial. We are helping them all along the way, but they are responsible from the planning of the trial to the planting the seeds to the harvest, from gathering the data, to analyzing that data to presenting the data.”

While building students’ skills, the arrangement also provides data to PMIL, which is working to enhance Haiti’s peanut sector by addressing production-related problems and improving conditions along the value chain.

The overall program includes a peanut-breeding program and looks at the unique growing conditions in Haiti, which has different soil conditions, weather and pests than many other peanut-growing parts of the world.

“We’ve done seed- and row-spacing trials, variety trials, and fungicide trials. Ultimately, we are trying to find the best answers to questions that deal with quality and quantity of the crop,” Fulmer said. “Our research is creating data that just didn’t exist before. Now we have actual evidence to direct decision-making.”

Finding basic prescriptions to grow a healthy crop would empower the country’s smallholder farmers, who produce about 24,000 metric tons of peanuts a year, but not enough to supply domestic markets and Ready-to-Use Therapeutic Food (RUTF) manufacturers in the country. 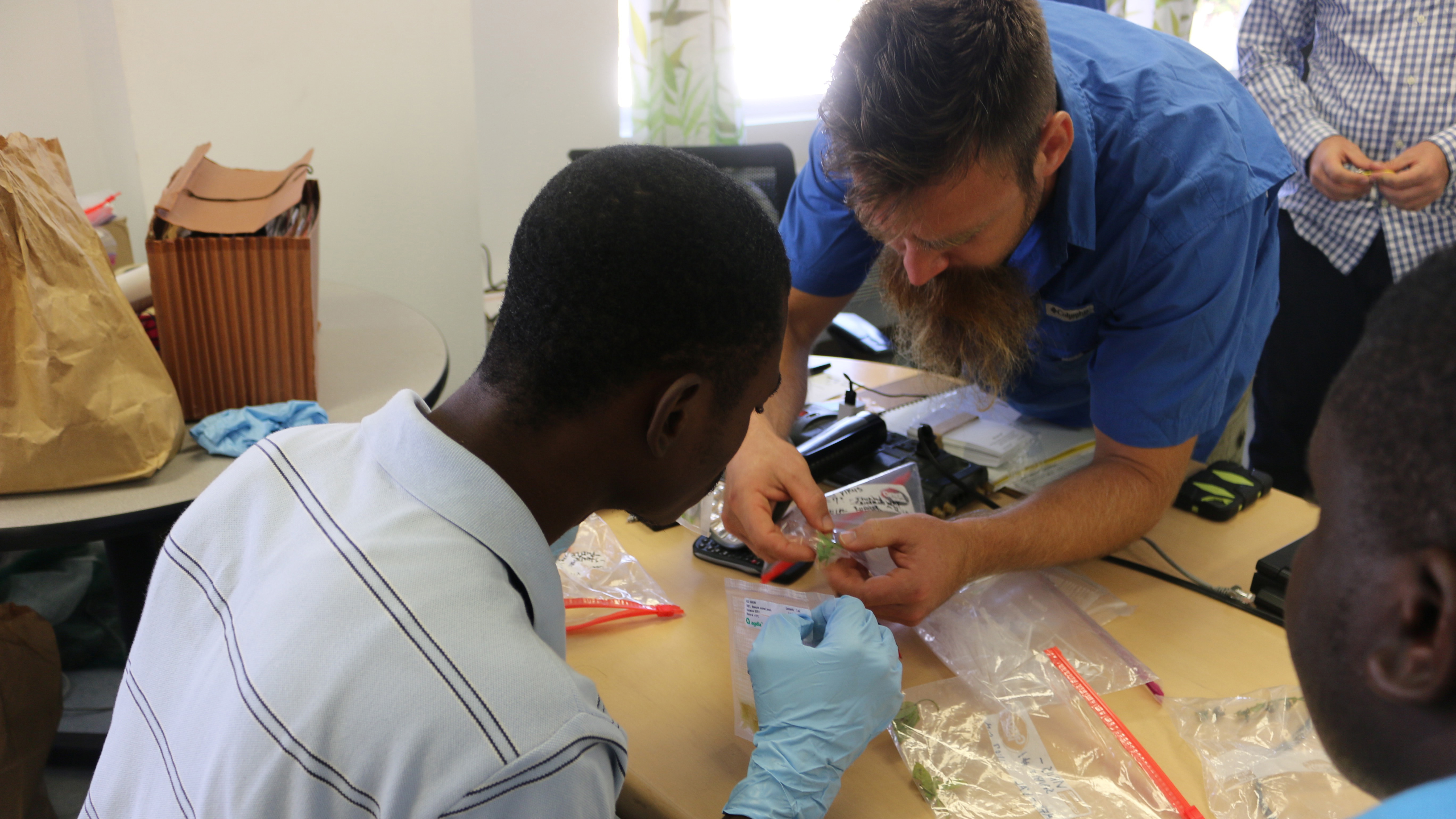 “Farmers in Haiti get between 300 and 800 pounds per acre. The average is probably around 500 pounds,” said PMIL Assistant Director James Rhoads, who worked with smallholder peanut farmers in Haiti while working for MFK.

“But, now we’re seeing yields in research plots and in scaled seed production in the 2000-pound range and higher. Abraham’s efforts are helping to close that yield gap.”

Getting a bigger crop out of the ground means more than just finding the right variety and hoping for rain. Farmers need to know when to invest time and inputs in fighting pests and disease.

“A lot of my research here in the U.S. has to do with leaf-spot pathogens. What are the factors that drive when the disease starts and how bad the disease gets?” Fulmer said. “I watch diseases very closely to pinpoint the conditions that have the most impact, so we can understand how to combat them.

“I’ve been able to carry that research over to Haiti, and that’s rewarding.”

When he started school, Fulmer was more interested in the aesthetic part of agriculture; he thought he might become a landscape architect.

“By nature, I am more artistic than scientific,” he said.

But a class with University of Georgia agronomy professor Dewey Lee caught his attention and set him on a career path – even if he wasn’t sure yet where that path would lead.

“I really became aware in that class of the importance of global agriculture and the challenges that our generation is going to face in terms of how to feed the world,” he said. “That message really grabbed ahold of me and I came to a moral realization that we have a responsibility to better the lives of our fellow men wherever they live.”

Still not quite sure what he wanted to do after finishing a bachelor’s degree, Fulmer traveled to Cambodia and in visiting with local farmers about the culture and people, learned that peanuts are part of the cuisine there and around the world. When he came home, UGA professor Bob Kemerait suggested Fulmer might work with PMIL. Now Kemerait is Fulmer’s major professor.

Two years later, Fulmer spends about one-third of the year in Haiti, mentoring and helping Haitian agronomy students with their research trials.

“Working in Haiti wasn’t something that I had to do to get my degree. But it was a good opportunity for me to get international experience,” he said.

The trade-off is that Fulmer took an extra year or so to work on his PhD, which he hopes to finish in the next year.

He’s not sure where he’ll work after that.

“I want to stay involved with international agriculture. I would love to have the opportunity to remain involved in Haiti,” he said. “But when I thought I knew exactly where I was going and what I wanted to do, that’s not how it worked out.

“And it’s going well, so I’ll have to see what comes next.”