Partnership is good for peanut production in Haiti 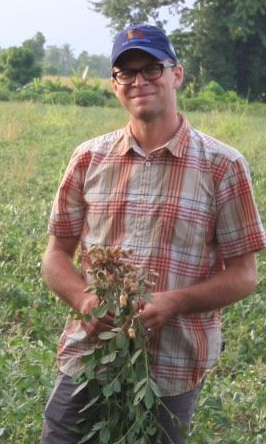 Peanut farmers in the Peasant’s Association of Savanne Longue in Haiti had a very productive 2014 growing season. In part, this was the culmination of years of collaboration between an array of government, university, civil society, and private sector partners on food security.

For the past three years, Missouri-based non-profit Meds & Food for Kids – which sources nutritious food aid products from local Haitians – has worked with farmers in the peasant association to develop their peanut production and improve the quality of their products.

A key component of this effort was the construction of a secure depot and drying area, built by local volunteers and made possible with funds from the U.S. Agency for International Development. The depot has allowed the farmers to effectively distribute seed, fertilizer, fungicide and other inputs as well as helped them consolidate their peanuts at harvest time.

But without strong business skills or access to capital, the farmers participating in this income-generating project had limited prospects for expansion. So Meds & Food for Kids began a partnership with the Feed the Future Innovation Lab for Peanut Productivity and Mycotoxin Control, led by the University of Georgia, and Acceso Peanut Corporation, a for-profit supply chain company, with financial support from the Clinton Guistra Enterprise Partnership.

Acceso offers commercial supply chain services for peanut farmers, such as training, tillage vouchers, seed and fungicide, and services such as drying, storage and aflatoxin testing through contract farming. During the 2014 season, Acceso expanded its operations from Haiti’s Central Plateau, working through the Savanne Longue depot and increasing the number of farmers in the contracted group to 150. Through this model, farmers enjoy a guaranteed buyer relationship with Acceso, which is then able to sell its products to Meds & Food for Kids for a profit.

In Haiti, seed is often measured volumetrically using a #10 can, about the size of a large metal coffee can. Using this metric, Acceso technician Jean Baptiste Ano reports that production increased dramatically in 2014: “This year we saw that farmers who used to plant 10 to 15 cans of seed peanuts and harvest only 20 to 25 cans were planting the same amount, but harvesting 200 or even 250 cans.”

These increases were achieved through improved seed varieties, coordinated planting, timely fungicide applications, and farmer training. While not all farmers in the program had such significant yield increases, farmers did achieve a 30 percent increase in income on average.

This public-private collaboration has also resulted in a major increase in local procurement by Meds & Food for Kids for the production of peanut-based nutritional foods, including Ready-to-Use Therapeutic Foods. For the past four years, the organization was able to procure a maximum of 30 metric tons of peanut products each year, but in 2014, 50 metric tons were procured from Acceso farmers alone. Such a substantial change shows great promise to build a sustainable and profitable peanut value chain in Haiti that benefits farmers and improves food security for Haiti’s most vulnerable populations.