Researchers trace peanut crop back to its Bolivian roots

University of Georgia, College of Agricultural and Envinronmental Sciences 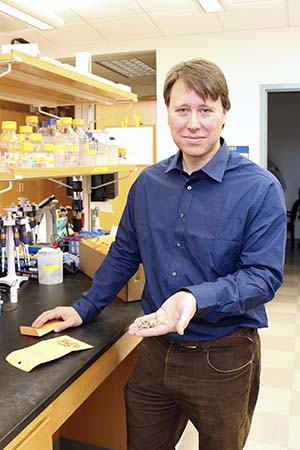 Athens, Ga. - Researchers at the University of Georgia, working with the International Peanut Genome Initiative, have discovered that a wild plant from Bolivia is a "living relic" of the prehistoric origins of the cultivated peanut species.

The peanut that is grown by farmers today is the result of hybridization between two wild species. The hybrid was cultivated by ancient inhabitants of South America and, by selection, was transformed into today's crop plant.

Comparisons of the DNA sequences of one of the wild species and the cultivated peanut showed that they are almost exactly same; in fact, they are 99.96 percent identical. It's an unprecedented similarity.

"It's almost as if we had traveled back in time and sampled the same plant that gave rise to cultivated peanuts from the gardens of these ancient people," said David Bertioli, an International Peanut Genome Initiative, or IPGI, plant geneticist of the Universidade de Brasília, who is working at UGA.