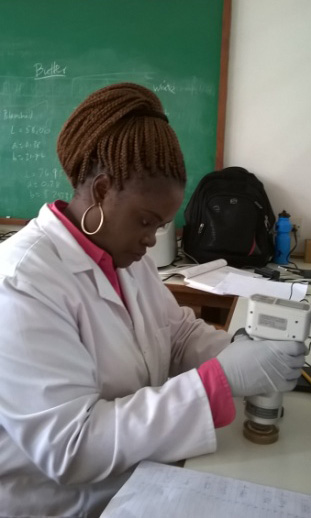 Thinking globally, Tchiyiwe Moyo-Chunda would like to see a day when European shoppers again trust Malawi-grown groundnuts, opening up a huge market for the farmers and processors of her home country in southern Africa.

Thinking locally, she wants to know that the entrepreneurial women in her region have all the knowledge they need to make tasty, nutritious and safe peanut butter for their families and the market.

Following an investigation into the quality and safety of peanut butter sold in stores and informal markets around the region, Moyo-Chunda developed a training program to educate Malawian processors – mostly women – about government standards, sources of contamination and ways to improve the consistency and quality of their peanut butter products.

“In Malawi, we have a lot of malnutrition cases every year, a lot of children dying,” Moyo-Chunda said. “I am a mother. It’s pathetic to see children suffer because they don’t have enough nutrients. I have this passion. I want to make a change in people’s lives.

“Even as little as they have, people can know how to process food properly. They can learn and improve and grow their businesses at the same time that they provide safe and nutritious food.”

Moyo-Chunda, a master’s student studying food science at Lilongwe University of Agriculture and Natural Resources (LUANAR), is supported by the US Government’s Feed the Future Peanut & Mycotoxin Innovation Lab. Her research is done in collaboration with North Carolina State University, which receives funding through University of Georgia-based PMIL.

“I was interested in this particular project because in Malawi, groundnuts have been returned from the European market because of aflatoxins. I was interested to know what happens, why this happens. I wanted to follow the value chain to understand better all the quality concerns with groundnuts...

“And I love groundnuts, too, by the way.”

Malawians eat peanuts – or groundnuts as they are called – in different forms, from sprinkling peanut powder on their children’s porridge for extra protein to spreading peanut butter on bread for adults and school-going children. 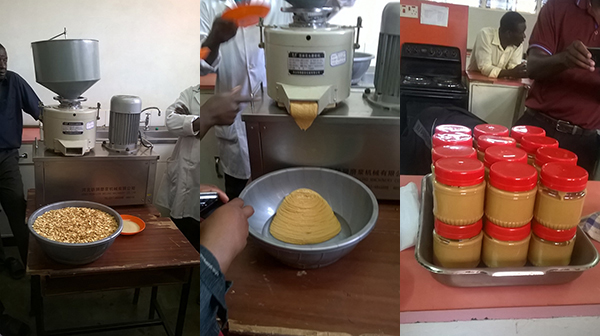 Part of the reason for that limited export market is aflatoxin, a product of naturally occurring mold that can contaminate groundnuts, maize and many other crops.

Moyo-Chunda began her work by surveying and collecting samples from 16 local processors (seven from Blantyre, five from Lilongwe, three from Mchinji and one from Zomba), people she found through newspaper advertisements, posts on social media, business association networking and word of mouth.

“We collected the baseline samples and questionnaire information. I wanted to test processors’ baseline knowledge, as well as get the data about the content of the groundnuts and peanut butter,” she said.

Half of samples were contaminated by aflatoxin, which ranged from 0 to 153 ppb. Some samples tested positive for faecal coliforms. Samples from the southern region showed a higher incidence of aflatoxin contamination than in the central part of the country, though the peanuts were grown in the same area, hinting that handling and storage were more of a factor in contamination than any growing practices. 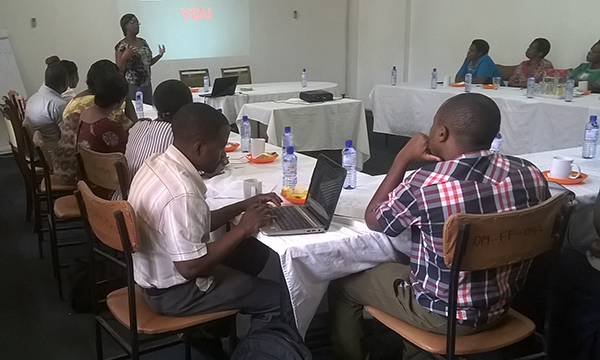 Aug. 24-29, 2015, Moyo-Chunda invited all the processors to attend a training addressing the contamination and quality problems uncovered in her research.

“We specifically addressed those gaps in the intervention,” she said. “In the five-day training, we had processors from all over Malawi, and we covered the gaps that we had identified. We had lots of practical sessions, trying to learn from one another how to make better peanut butter.”

That training brought together 16 small-scale processors from across the country, women who process groundnuts in the same kitchen where they prepare meals for their families. These processors sell in an informal market, but their products impact a wide group of people, Moyo-Chunda said, and the knowledge they gained will affect an even larger group as they share what they learned. 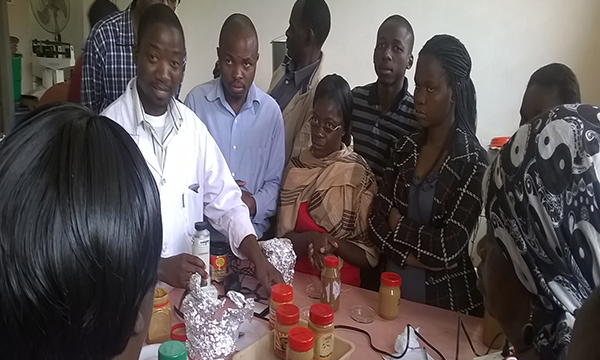 The final phase of the project is to reassess the same products to see whether training alone could improve the quality of peanut butter processed in small-scale operations.

After presenting her findings at a symposium late last month, Moyo-Chunda will publish the data early next year and continue with follow-up visits to the processors to help them create sanitary production areas and good record-keeping practices.

Improvement is a continuous process, Moyo-Chunda said, that could carry the small-scale processors to the formal market one day.

“We have a lot of peanut butter imported from South Africa, so we can do the same. We can become an exporter.”

For herself, Moyo-Chunda will complete her master’s degree in Human Nutrition in 2016 and go to work.

“Wherever I can make policy, however I can change people’s lives. That’s where I will be,” she said.