Resources
CAES / Feed the Future Innovation Lab for Peanut / Resources / Brochures / Finding the needle in the haystack: Refining the way we look for aflatoxin

Finding the needle in the haystack: Refining the way we look for aflatoxin

How do you find a needle in a haystack? Well, it isn’t impossible, at least not statistically.

Researchers have faced a similar problem for years when trying to test for mycotoxin contamination in food lots. Produced by Aspergillus molds, aflatoxin (a type of mycotoxin) can infect a single kernel of corn or peanut, making that one “hot” kernel important to capture in any sampling process.

You don’t want to miss the contaminated kernel, but also don’t want to capture a disproportionate number of infected kernels and unnecessarily reject a lot either. Tom Whitaker has studied this problem for decades and established sampling protocols to achieve the most accurate test result from large lots that balances the risks to both consumers and producers who may have product unnecessarily rejected. 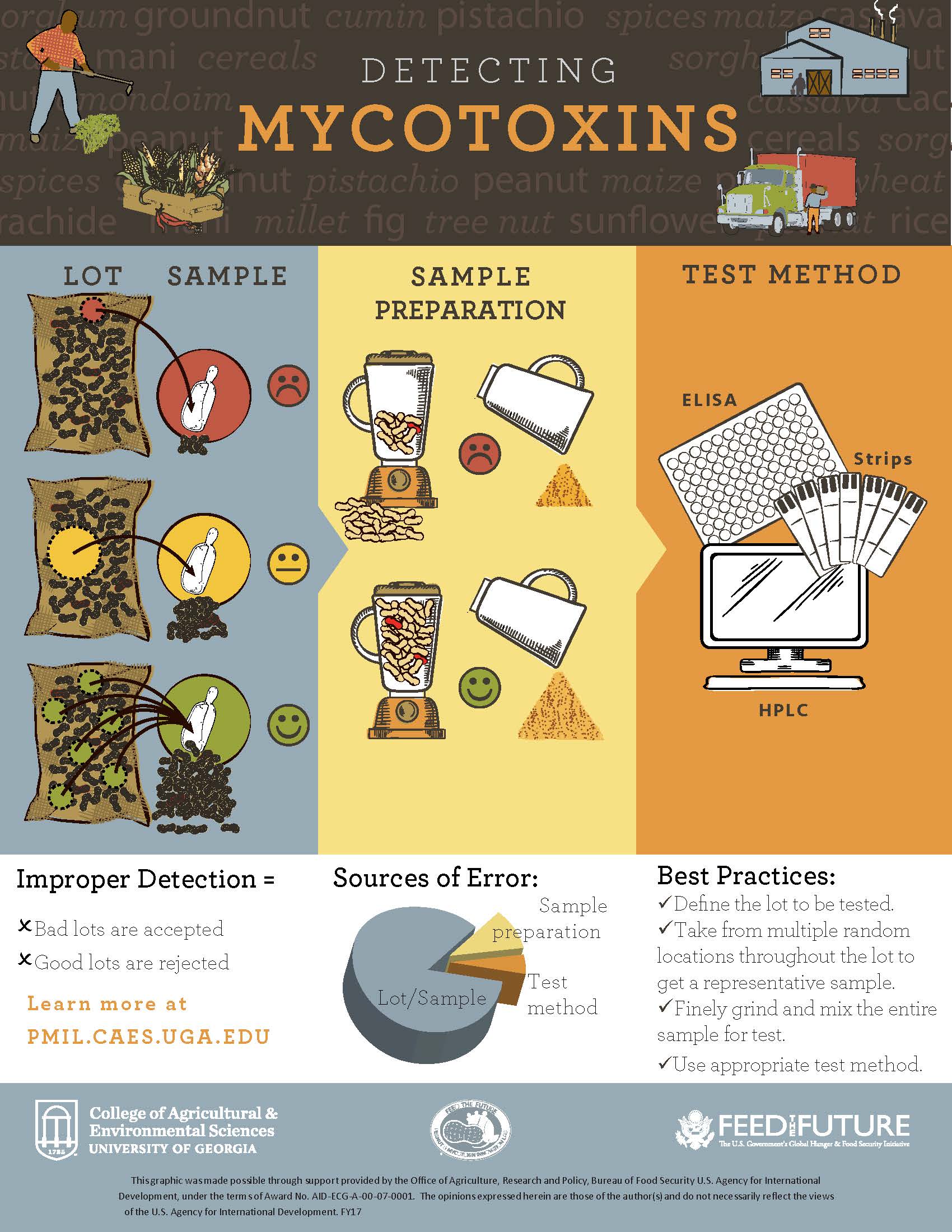 “That kernel not only is a needle in the haystack, but it also might have a wide range in the amount of aflatoxin … from just a low level on up to 1 million parts per billion,” said Whitaker, a retired agricultural engineer. “It’s a problem within a problem.

“There’s nothing wrong with that. It’s just the situation that God gave you, but you have to manage it the best you can.”

When Whitaker was hired at the USDA’s Agricultural Research Service in 1967, one of his first tasks was to figure out why aflatoxin test results seemed so inconsistent. At first, everyone assumed either the test method or lab processes were to blame.

“We saw that the lab technicians weren’t doing anything wrong. They were taking multiple samples from contaminated lots and getting a very wide range among the sample test results. They were just dealing with this distribution issue.”

He actually did find some level of error with commonly used tests and testing procedures, but by far the biggest contributor to error was sample size due to the uneven aflatoxin distribution problem. Once he identified the problem, Whitaker turned his attention to finding the best protocol for sizing, preparing and analyzing a sample. Obviously, the most accurate assessment would be to analyze the entire lot, but since the test requires grinding the product and chemically extracting the toxin, that would defeat the purpose. So the question remained, how much of a lot can you afford to destroy in order to get an acceptably accurate test result?

Finding that needle in the haystack requires some sacrifice of the crop, but it’s important.

A carcinogenic chemical, aflatoxin can cause liver failure, immune suppression, and stunting in children; because buyers don’t want obviously moldy produce, poorer farm families in developing countries may be more likely to consume contaminated maize or peanut and sell the marketable crop. And rigorous aflatoxin limits by the European Union put that export market out of reach for many of the world’s smallholder farmers, adding another financial component to the problem.

The Innovation Lab for Collaborative Research on Peanut Productivity and Mycotoxin Control has worked to communicate Whitaker’s findings, relay the impact of sampling on test accuracy, and raise awareness about how to achieve the best results.

In 2014, the lab organized the three-part webinar with Whitaker and engineer Andrew Slate, both faculty members of the Biological and Agricultural Engineering Department at North Carolina State University. In the sessions, Whitaker explained the research behind the development of the Mycotoxin Sampling Tool, an online tool now supported by FAO that helps users create sampling plans for different commodities under different conditions to achieve the most accurate test result and reduce the risks of misclassifying lots.

When training graduate students, lab techs, and others on testing equipment – including a relatively new tablet-based assay that allows for testing in remote areas – PMIL has first delved into sampling theory, presenting examples of mistakes that might skew results and how to avoid them.

That work led PMIL recently to create an infographic, the third in a series, reinforcing the common lessons found in Whitaker’s research:

·      Take an adequately sized random, representative sample, from many locations within a lot. (Small sample sizes can represent roughly 85% of the variability associated with the entire aflatoxin test procedure.)

·      Finely grind the entire sample; not just the portion to be tested. (Sample preparation represents roughly 10% of the variability associated with the entire aflatoxin test procedure.)

·      Extract and analyze a sub-sample from the ground sample using the appropriate method for the conditions. (The analytical method, often the primary focus of researchers and industry, represents roughly only 5% of the variability associated with the entire aflatoxin test procedure, but often requires the bulk of the cost in the testing procedure.) 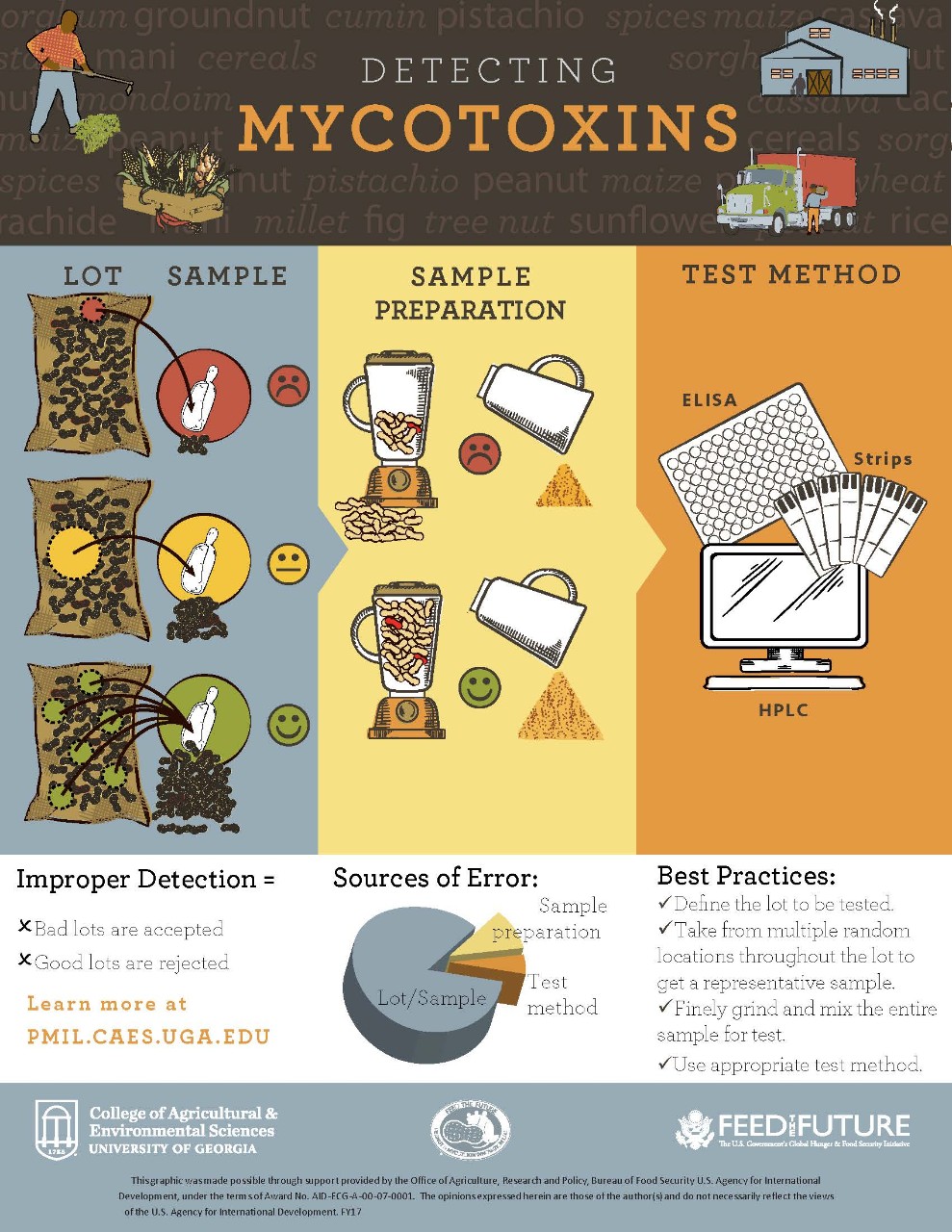 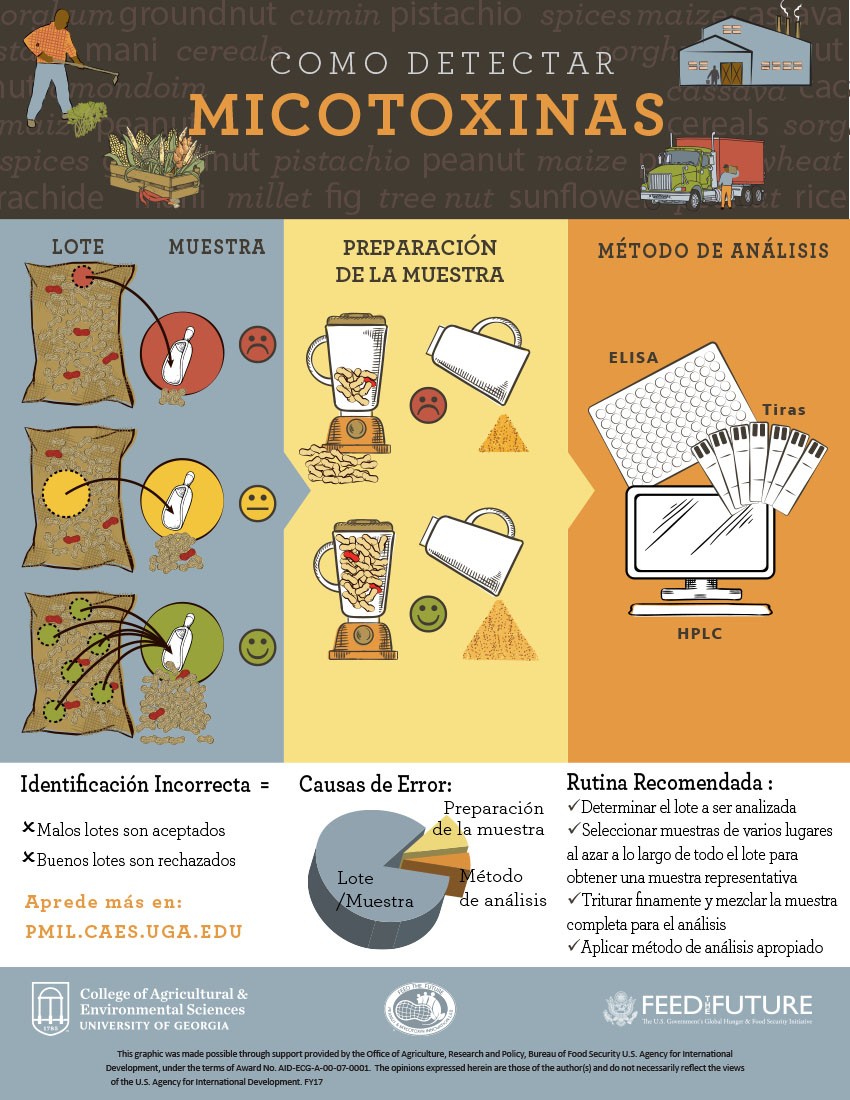 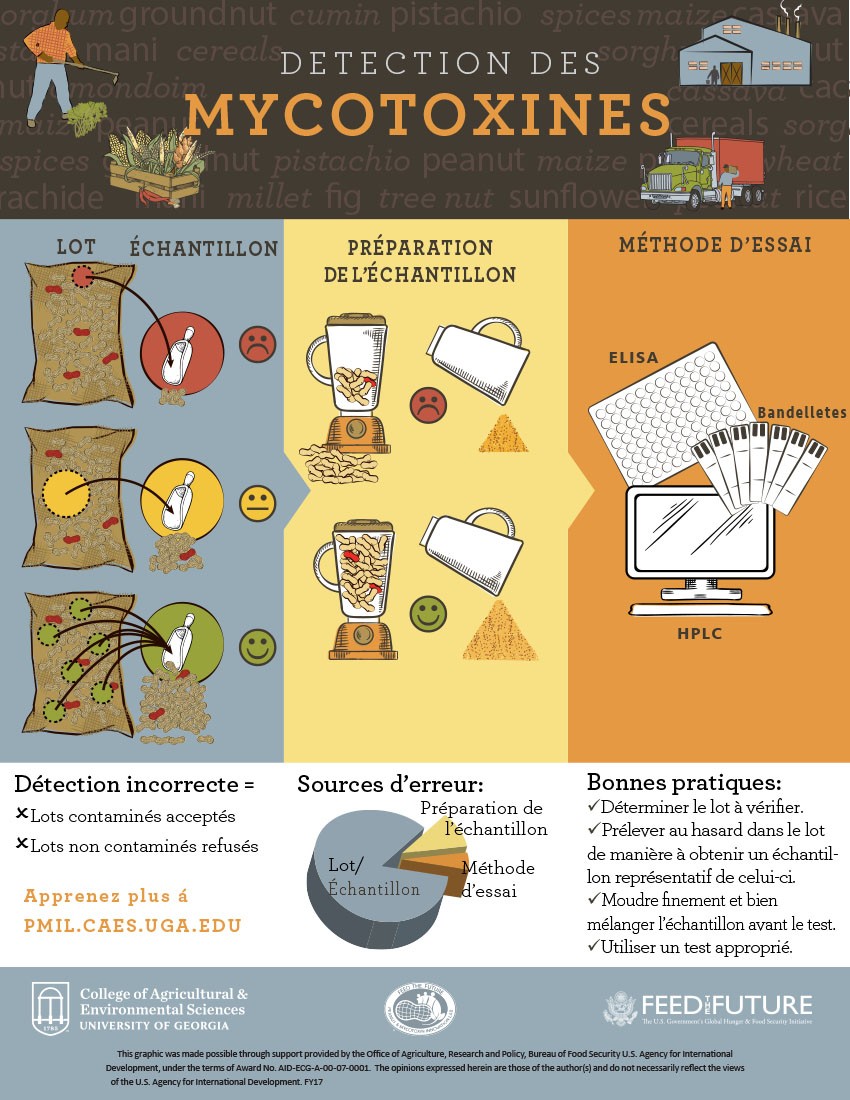 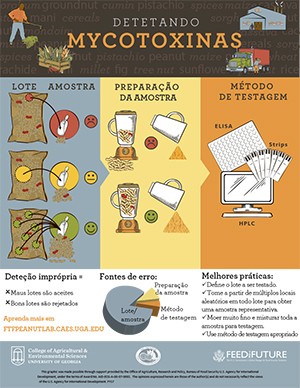 While the USDA has enforced standardized aflatoxin sampling plans for several commodities in the US for many years, in many parts of Africa – where the climate also encourages the fungi that can create aflatoxin – they don’t yet have consistent testing protocols.

“In the U.S., just in peanuts alone, hundreds of scientists have been working for years to get food from the farm to the processor to the consumer, while developing methods to prevent contamination and rooting it out when it happens. Not everywhere in the world has those kinds of resources to deal with this problem,” Whitaker said.

He and Slate have recently been working through the Foreign Agricultural Service of the USDA (USDA/FAS) in cooperation with several African organizations such as the Common Market for Eastern and Southern Africa (COMESA) and the African Agricultural Technology Foundation (AATF) to develop aflatoxin sampling protocols for corn and peanuts traded among Sub-Saharan countries of East Africa.

The protocols were developed by Whitaker and Slate, and introduced at a workshop organized by COMESA in Kampala, Uganda in December 2015; countries then began to test the protocols on their own, comparing their accuracy and setting the stage for a common sampling procedure that could improve trade among countries in Eastern Africa and increase consumer safety.

“It’s one thing to put down on paper a protocol, but you have to ask yourself, ‘Does it work in practice in a certain area and with the infrastructure there?’ ” Whitaker said.

Some aspects of sampling don’t change – that the sample should be taken in random increments from through the lot, for example. But the size of the sample might change based on how much risk of misclassification is acceptable in a given place relative to the cost of the test and the value of the commodity.

COMESA implemented Whitaker’s suggested sampling protocol in four locations; the response was favorable, though processors indicated that problems arose because they didn’t have the proper equipment to take and prepare samples.

Similar protocols are expected to be implemented in West Africa later this year. The Economic Community of West African States (ECOWAS) is interested in transferring the protocol to their countries and will be meeting in June in Dakar to discuss the details.

“COMESA wanted a homogenous sampling protocol for all of sub-Saharan East Africa. They were hopeful that the protocols would lead to increased trade among those countries and, maybe, one day, with Europe,” Whitaker said. Since the European Union implemented strict aflatoxin limits in the 1990s, southern Africa has lost all peanut trade with that once-profitable market. Finding a way to regain that lost trade has become a brass ring in sub-Saharan Africa.

“Africa needs the protein. The last thing they need is a sampling protocol that’s going to remove lots from the market system, to take food away,” said Whitaker.

USDA/FAS, NCSU, and African organizations will conintue to work to find the ideal sample size and protocols will take the least amount of food from the market place, while still removing contaminated lots to improve food safety for consumers.