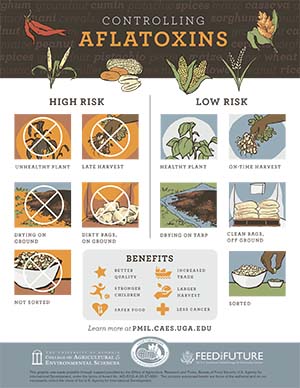 Aflatoxin contamination can cost smallholder farmers at the market and leave them with potentially dangerous food to feed their families, but a few simple techniques have been proven to reduce the likelihood and severity of contamination.

The Peanut & Mycotoxin Innovation Lab has created an infographic to relay that important information to farmers and consumers in partner countries around the world using limited written language.

The new “Controlling Aflatoxins” graphic expresses some of the ways farmers can work to keep crops free of aflatoxin, a poison that can contaminate maize, groundnuts, treenuts and other crops through a common, naturally occurring mold.

PMIL released a similar infographic late last year highlighting the nutrition and health benefits of groundnuts grown around the world. This latest effort extends that approach, and applies to several crops that can be affected by aflatoxin.

Improved growing techniques, such as controlling pests and diseases that result in a healthier plant, and harvesting on time (rather than late) correlate to less contamination. Drying and storing the crop properly, as well as sorting out discolored kernels or nuts also can reduce aflatoxin levels in food.

A clean harvest can bring big benefits, both to human health, livestock and financial returns. Following the guidelines to control aflatoxin can produce a larger, higher quality crop, which makes food safer and can lead to more trade.

While Controlling Aflatoxin was designed to be read through photos, PMIL intends to translate the few words on the graphic into various languages and dialects. The earlier One Handful infographic has been translated into more than a dozen languages and is available on the PMIL website.