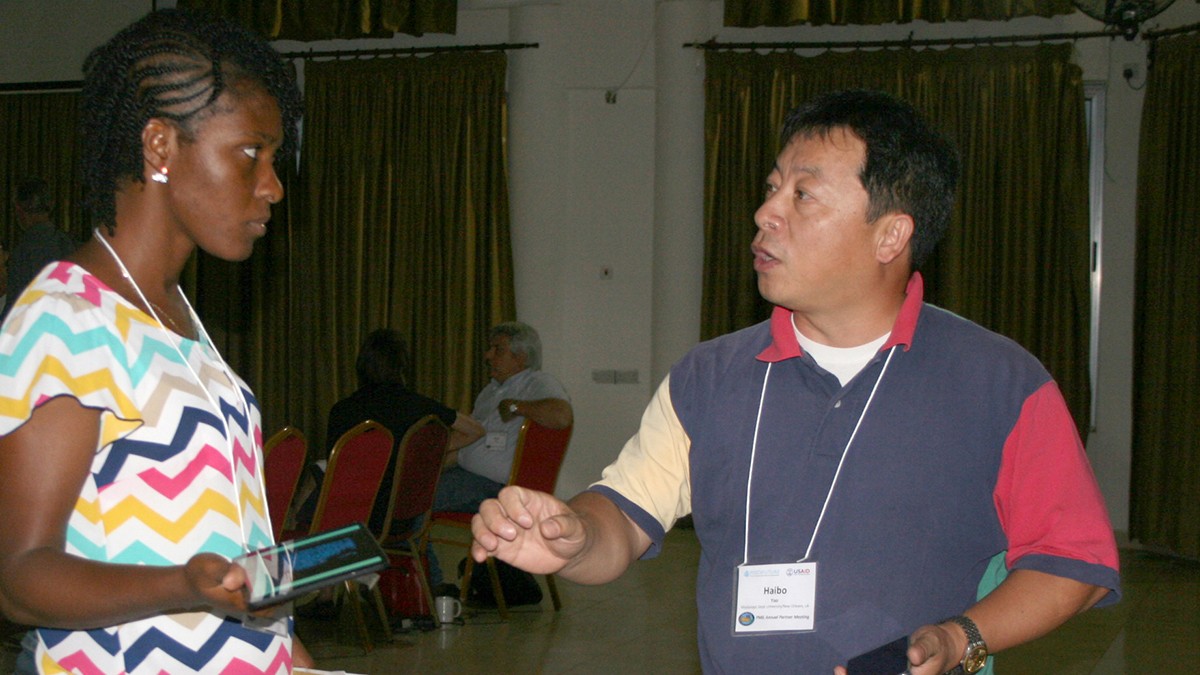 Haibo Yao, right, explains to a student how the Aflabox works. A project to create a non-destructive test for aflatoxin contamination has proven the concept that bad maize kernels will visibly glow under certain UV light. (Photo by Allison Floyd)

One of the challenges with detecting aflatoxin in crops – a byproduct of the Aspergillus flavus fungus that infects cereals, legumes and many other crops – is that the mold doesn’t spread evenly. A single nut or kernel may have a high level of contamination, while all those around it are toxin-free. And while highly contaminated nuts or kernels may show clear signs, the human eye can’t always see the damage mold left behind.

Scientists have worked for years to develop a system that allows the human eye to see the fluorescence of grain contaminated with aflatoxin. Many of these tests require that kernels be destroyed or ground up, a process that takes time and requires the sacrifice of a portion of the crop to serve as a test sample.

A portable, fluorescence spectral-based technology developed by Haibo Yao, a Feed the Future Peanut and Mycotoxin Innovation Lab scientist and associate research professor for Mississippi State University, allows a person to see individual aflatoxin-contaminated corn kernels without prepping the sample in any way.

At first, Yao envisioned goggles that would allow a tester to see the fluorescence emitted by the toxin. That concept has evolved into a handheld device, currently a small box, that uses UV LEDs to cause the contaminated kernels to fluoresce and a camera in a simple tablet to detect and display the image.

The method is non-invasive and might ultimately allow large-scale aflatoxin screening – for example, at a buying point – for only the initial cost of investing in the equipment. To initially test the device, 5 kilograms of maize was divided into 100 samples, each weighing about 50 grams. Each sample was mixed with one or more aflatoxin-contaminated maize kernels. The mixed samples then were scanned with the fluorescence spectral imaging system, and the software installed on the tablet used an algorithm developed by the team to determine if each kernel was contaminated. The resulting image displayed on the tablet clearly indicated the “glowing” or contaminated kernels in the sample.

By locating and removing just 1 percent “bad” kernels from the total 5 kilogram sample, the researchers were able to reduce the overall aflatoxin contamination by 30 percent.

Currently, the process is qualitative, showing only the presence/absence of aflatoxin, but further research is underway to connect the intensity of the fluorescence with the level of aflatoxin contamination. This would allow a test to estimate to the actual amount of aflatoxin present in a sample. The scientists also are researching how well the system will work to screen peanut samples.

While significant work is required before the device will be ready to release to partners, the team is encouraged by the potential for a no-cost aflatoxin test for rapid and more effective screening of large batches of commodities. Ultimately, farmers, buyers and others along the value chain will be able to quickly assess the quality of the material they have to sell, buy or process.